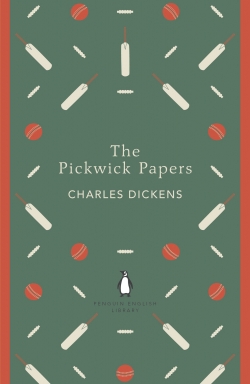 The Posthumous Papers of the Pickwick Club (also known as The Pickwick Papers) is Charles Dickens's first novel. He was asked to contribute to the project as an up-and-coming writer following the success of Sketches by Boz, published in 1836 (most of Dickens' novels were issued in shilling installments before being published as complete volumes). Dickens (still writing under the pseudonym of Boz) increasingly took over the unsuccessful monthly publication after the original illustrator Robert Seymour had committed suicide.

With the introduction of Sam Weller in chapter 10, the book became the first real publishing phenomenon, with bootleg copies, theatrical performances, Sam Weller joke books, and other merchandise.

After the publication, the widow of Robert Seymour claimed that the idea for the novel was originally her husband's; however, in his preface to the 1867 edition, Dickens strenuously denied any specific input, writing that "Mr Seymour never originated or suggested an incident, a phrase, or a word, to be found in the book."

Written for publication as a serial, The Pickwick Papers is a sequence of loosely-related adventures. The action is given as occurring 1827–8, though critics have noted some seeming anachronisms. It has been stated that Dickens satirized the case of George Norton suing Lord Melbourne in The Pickwick Papers. The novel's main character, Samuel Pickwick, Esquire, is a kind and wealthy old gentleman, and the founder and perpetual president of the Pickwick Club. To extend his researches into the quaint and curious phenomena of life, he suggests that he and three other "Pickwickians" (Mr Nathaniel Winkle, Mr Augustus Snodgrass, and Mr Tracy Tupman) should make journeys to places remote from London and report on their findings to the other members of the club. Their travels throughout the English countryside by coach provide the chief theme of the novel. A distinctive and valuable feature of the work is the generally accurate description of the old coaching inns of England. (One of the main families running the Bristol to Bath coaches at the time was started by Eleazer Pickwick).

Some Rambling Notes of an Idle Excursion