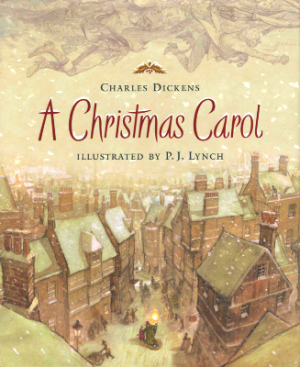 A Christmas Carol is a novella by English author Charles Dickens, first published by Chapman & Hall on 19 December 1843. It tells the story of bitter old miser Ebenezer Scrooge and his transformation resulting from supernatural visits by Jacob Marley and the Ghosts of Christmases Past, Present and Yet to Come. The novella met with instant success and critical acclaim.

The book was written and published in early Victorian era Britain, a period when there was strong nostalgia for old Christmas traditions together with the introduction of new customs, such as Christmas trees and greeting cards. Dickens' sources for the tale appear to be many and varied, but are, principally, the humiliating experiences of his childhood, his sympathy for the poor, and various Christmas stories and fairy tales.

The tale has been viewed by critics as an indictment of 19th century industrial capitalism. It has been credited with restoring the Christmas season as one of merriment and festivity in Britain and America after a period of sobriety and sombreness. A Christmas Carol remains popular - having never been out of print – and has been adapted many times to film, stage, opera, and other media.

In the mid-19th century, a nostalgic interest in former Christmas traditions swept Victorian England following the publication of three influential books: Davies Gilbert's Some Ancient Christmas Carols (1822), William Sandys's Selection of Christmas Carols, Ancient and Modern (1833), and Thomas K. Hervey's The Book of Christmas (1837). That interest was further stimulated by Prince Albert, Queen Victoria's German-born husband, who popularised the German Christmas tree in Britain after their marriage in 1841, the first Christmas card in 1843, and a revival in carol singing. Hervey's study of Christmas customs attributed their passing to regrettable social change and the urbanisation of England.

Dickens' Carol was one of the greatest influences in rejuvenating the old Christmas traditions of England but, while it brings to the reader images of light, joy, warmth and life, it also brings strong and unforgettable images of darkness, despair, coldness, sadness and death. Scrooge himself is the embodiment of winter, and, just as winter is followed by spring and the renewal of life, so too is Scrooge's cold, pinched heart restored to the innocent goodwill he had known in his childhood and youth.