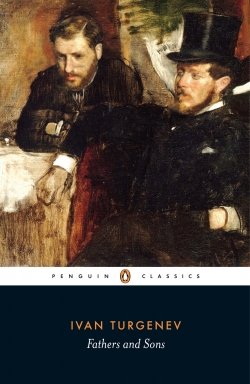 Arkady Kirsanov has just graduated from the University of Petersburg and returns with a friend, Bazarov, to his father's modest estate in an outlying province of Russia. His father, Nikolai, gladly receives the two young men at his estate, called Marino, but Nikolai's brother, Pavel, soon becomes upset by the strange new philosophy called "nihilism" which the young men advocate.

Nikolai feels awkward with his son at home, partially because Arkady's views have dated his own beliefs, and partially because he has taken a servant, Fenichka, into his house to live with him and has already had a son by her.

The two young men remain at Marino for a short time, then decide to visit a relative of Arkady's in a neighboring province. There they observe the local gentry and meet Madame Odintsova, an elegant woman of independent means who invites them to spend a few days at her estate, Nikolskoe.

At Nikolskoe, they also meet Katya, Madame Odintsova's sister. Although they remain for only a short period, both characters change a lot. Their relationship with each other is especially affected, because they both find themselves drawn to Madame Odintsova. Bazarov in particular, finding this distressing because falling in love goes against his beliefs. Eventually, he announces that he loves her. She does not respond to his declaration, and soon after, Arkady and Bazarov leave for Bazarov's home.

The Poems and Verses of Charles Dickens