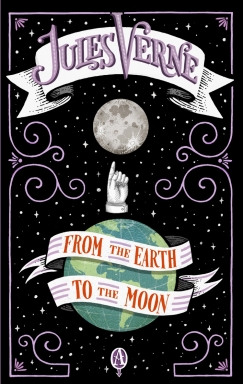 From the Earth to the Moon (French: De la terre à la lune) is an 1865 novel by Jules Verne. It tells the story of the Baltimore Gun Club, a post-American Civil War society of weapons aficionados, and their attempts to build an enormous sky-facing Columbiadspace gun and launch three people - the Gun Club's president, his Philadelphian armor-making rival, and a French poet - in a projectile with the goal of a moon landing.

The story is also notable in that Verne attempted to do some rough calculations as to the requirements for the cannon and, considering the comparative lack of any data on the subject at the time, some of his figures are surprisingly close to reality. However, his scenario turned out to be impractical for safe manned space travel since a much longer muzzle would have been required to reach escape velocity while limiting acceleration to survivable limits for the passengers.

The character of Michel Ardan, the French poet in the novel, was inspired by the real-life photographer Félix Nadar.

It has been some time since the end of the American Civil War. The Gun Club, a society based inBaltimore and dedicated to the design of weapons of all kinds (especially cannons), meets when Impey Barbicane, its president, calls them to support his idea: according to his calculations, a cannon can shoot a projectile so that it reaches the moon. After receiving the whole support of his companions, a few of them meet to decide the place from where the projectile will be shot, the dimensions and makings of both the cannon and the projectile, and which kind of powder are they to use.

An old enemy of Barbicane, a Captain Nicholl of Philadelphia, designer of plate armor, declares that the enterprise is absurd and makes a series of bets with Barbicane, each of them of increasing amount over the impossibility of such feat.

The first obstacle, the money, and over which Nicholl has bet 1000 dollars, is raised from most countries in America and Europe, in which the mission reaches variable success (while the USA gives 4 million dollars, England does not give a farthing, being envious of the United States in matters of science), but in the end nearly five and a half million dollars are raised, which ensures the financial feasibility of the project.

The Home and the World

Around the World in Eighty Days

Five Weeks in a Balloon