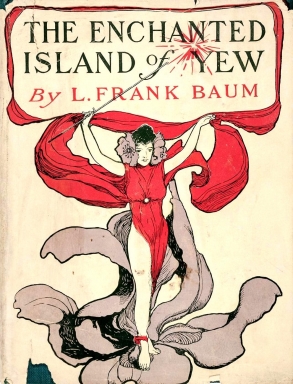 The Enchanted Island of Yew: Whereon Prince Marvel Encountered the High Ki of Twi and Other Surprising People is achildren's fantasy novel written by L. Frank Baum, illustrated by Fanny Y. Cory, and published by the Bobbs-Merrill Company in 1903.

The first edition contained eight color plates and many colored-ink illustrations stamped over the text, and was dedicated to Kenneth Gage Baum, the youngest of the author's four sons.

Sesely, daughter of Baron Merd of Heg, and two companions are enjoying a picnic in the Forest of Lurla when they are accosted by a fairy. The fairy, bored with centuries of insipid fairy life, amazes the girls by pleading to be changed into a mortal. Though the girls are surprised that they might have the power to do such a thing, the fairy explains how it can be done. The girls agree to transform the fairy into a human boy for the space of one year. The newly minted male is dubbed Prince Marvel, and, furnished with fairy arms and armor and an enchanted horse (a deer transformed), sets out to have adventures.

Since Yew is so dominated by robbers and rogues, Prince Marvel doesn't have to travel far to find said adventures. He starts off by confronting and besting the bandits of Wul-Takim, the self-styled King of Thieves. Marvel captures all fifty-nine of the band and is ready to send them to the gallows – but Wul-Takim convinces the naive ex-fairy that the robbers are now honest men, whom it would be unfair to hang. Marvel rescues a prisoner from the robbers, a young man named Nerle, who becomes Marvel's squire-boy. The match is a good one: while Marvel yearns for adventure, Nerle actually longs to suffer pain and deprivation, and often reproaches Marvel for saving him from harm.

Prince Prigio; From "His Own Fairy Book"