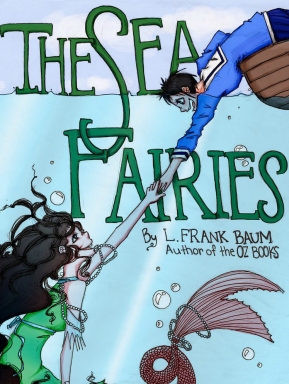 The Sea Fairies is a children's fantasy novel written by L. Frank Baum, illustrated by John R. Neill, and published in 1911 by theReilly & Britton Company, the publisher of Baum's series of Oz books. Baum dedicated the book to the otherwise-unknown "Judith of Randolph, Massachusetts" — most likely one of the child readers who corresponded with the author.

As an underwater fantasy, Baum's The Sea Fairies can be classed with earlier books with similar themes, like Charles Kingsley's The Water-Babies (1863), and successors too, like E. Nesbit's Wet Magic (1913). Baum's novel has no relation to the 1830 poem of the same name by Alfred, Lord Tennyson. In 1905, however, a musical setting of Tennyson's poem for female chorus and orchestra, composed by Amy Beach, was in performance; the title may have stuck in the back of Baum's mind.

Mayre Griffiths, nicknamed Trot, or sometimes Tiny Trot, is a little girl who lives on the coast of southern California. Her father is the captain of a sailing schooner, and her constant companion is Cap'n Bill Weedles, a retired sailor with a wooden leg. (Cap'n Bill had been Trot's father's skipper, and Charlie Griffiths had been his mate, before the accident that took the older man's leg.) Trot and Cap'n Bill spend many of their days roaming the beaches near home, or rowing and sailing along the coast. One day, Trot wishes that she could see a mermaid; her wish is overheard, and granted the next day. The mermaids explain to Trot, and the distressed Cap'n Bill, that they are benevolent fairies; when they offer Trot a chance to pay a visit to their land in mermaid form, Trot is enthusiastic, and Bill is too loyal to let her go off without him.

Kilmeny of the Orchard