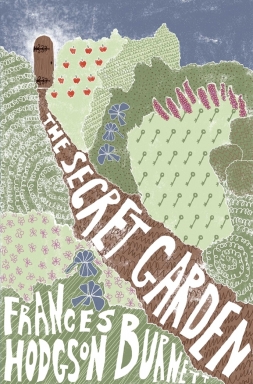 The Secret Garden is a novel by Frances Hodgson Burnett. It was initially published in serial format starting in the autumn of 1910, and was first published in its entirety in 1911. It is now one of Burnett's most popular novels, and is considered to be a classic of English children's literature. Several stage and film adaptations have been produced.

Mary Lennox is a very troubled, sickly and unloved 10-year-old girl who was born in India to selfish, wealthy British parents who never wanted her and were too wrapped up in their own lives to love or care about her. She was taken care of primarily by servants, who pacified her as much as possible to keep her out of her parents' way. Spoiled and selfish, she is aggressive, surly, rude and obstinate. Later, there is a cholera epidemic which hits India and kills her parents and all the servants. She is discovered alone but alive after the house is empty. She briefly lives with an English clergyman and his family and is then sent to Yorkshire, England, to live with Archibald Craven, an uncle she has never met, at his home called Misselthwaite Manor.

At first, Mary is her usual self, sour and rude, disliking her uncle's large house, the people within it and most of all the vast stretch of moor, which seems scrubby and grey after the winter. She is told that she must stay confined to her two rooms and that nobody will bother much with her and she must amuse herself. Martha Sowerby, her good-natured maidservant, tells Mary a story of the late Mrs. Craven, and how she would spend hours in a private walled garden growing roses. Later, Mrs. Craven was killed by sitting in a tree and the branch broke, and Mr. Craven had the garden locked and the key buried. Mary is roused by this story and starts to soften her ill manner despite herself. Soon she begins to lose her disposition and gradually comes to enjoy the company of Martha, Ben Weatherstaff the gardener, and also that of a friendly robin redbreast to whom she attaches human qualities. Her appetite increases and she finds herself getting stronger as she plays by herself on the moor. Martha's mother buys Mary a skipping rope to encourage this, and she takes to it immediately. Mary's time is occupied by wondering about the secret garden and a strange crying sound that can sometimes be heard around the house which the servants ignore or deny.

Kilmeny of the Orchard