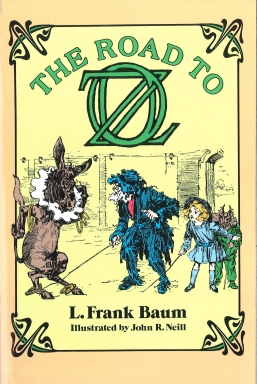 The Road to Oz: In Which Is Related How Dorothy Gale of Kansas, The Shaggy Man, Button Bright, and Polychrome the Rainbow's Daughter Met on an Enchanted Road and Followed it All the Way to the Marvelous Land of Oz. is the fifth of L. Frank Baum's Land of Oz books. It was originally published on July 10, 1909 and documents Dorothy's fourth visit to Oz.

Dorothy is near her home in Kansas when the story begins. She and her dog Toto first meet the Shaggy Man, a wandering hobo who carries the Love Magnet with him, en route to avoid the town of Butterfield. Further on, the road splits into seven paths. They take the seventh and soon meet Button-Bright, a little boy in a sailor's outfit who is always getting lost. Later, the companions meetPolychrome the Rainbow's Daughter, a fairy who danced off the edge of the rainbow just as it disappeared.

Dorothy, Toto, the Shaggy Man, Button-Bright, and Polychrome soon come to the town of Foxville, where anthropomorphic foxes live. With prompting from King Dox of Foxville, Dorothy deduces that she's on another "fairy adventure" that will ultimately lead her to Oz, just in time for Ozma's birthday party, which is now acknowledged as August 21 by Oz fans, even though the book only refers to the 21st of the month, Dorothy having mentioned that the current month is August in another passage. The king takes a particular liking to Button Bright, whom he considers astute and clever due to his tabula rasa-like mind. Believing that the human face does not suit one so clever, Dox gives him a fox's head. A similar event subsequently happens to the Shaggy Man, when King Kik-a-Bray of Dunkiton confers a donkey's head upon him—also in reward for cleverness, even though it's implied that Foxville and Dunkiton exist at odds with one another.

Prince Prigio; From "His Own Fairy Book"