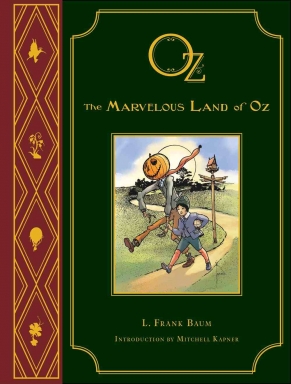 The Marvelous Land of Oz: Being an Account of the Further Adventures of the Scarecrow and the Tin Woodman, commonly shortened to The Land of Oz, published on July 5, 1904, is the second of L. Frank Baum's books set in the Land of Oz, and the sequel to The Wonderful Wizard of Oz. This and the next 34 Oz books of the famous 40 were illustrated by John R. Neill. The book was made into an episode of The Shirley Temple Show in 1960, and into a Canadian animated feature film of the same name in 1987. It was also adapted in comic book form by Marvel Comics, with the first issue being released in November 2009. Plot elements from The Marvelous Land of Oz are included in the 1985 Disney feature film Return to Oz.

Set shortly after the events in the first book, the protagonist is a boy named Tip, who for as long as he can remember has been under the guardianship of a witch named Mombi (who is the main antagonist) in Gillikin Country. As Mombi is returning home, Tip plans to frighten her with a scarecrow he has made. Since he has no straw available, Tip instead makes a man out of wood and gives him a pumpkin for a head, naming him Jack Pumpkinhead. Mombi is not fooled, and she takes this opportunity to demonstrate the Powder of Life that she bought from another sorcerer. She sprinkles the powder on Jack, bringing him to life and startling Tip, whom Mombi catches and threatens to turn into a marble statue.

Tip leaves with Jack that night and steals the Powder of Life because Mombi plans to turn him into a marble statue in the morning. As they head for the Emerald City, Tip uses the Powder of Life to animate the Sawhorse so Jack can ride him (for even though Jack's wooden body does not tire, it can get worn away from all of the walking). Tip loses them as the tireless Sawhorse gallops faster and he meets with General Jinjur's all-girl Army of Revolt which is planning to overthrow the Scarecrow (who has ruled the Emerald City since the end of The Wonderful Wizard of Oz). Marching with the Army, Tip meets again with Jack, the Sawhorse, and now the Scarecrow as they flee the Emerald City in Jinjur's wake.

Tales of Wonder Every Child Should Know