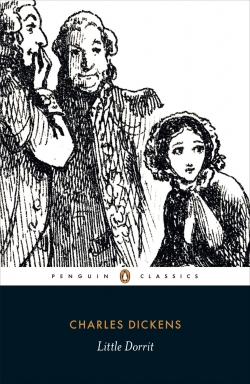 Little Dorrit is a serial novel by Charles Dickens, originally published between 1855 and 1857. It is a work of satire on the shortcomings of the government and society of the period. Much of Dickens's ire is focused upon the institutions of debtors' prisons, in which people who owed money were imprisoned, unable to work, until they repaid their debts. The representative prison in this case is the Marshalsea, where the author's own father had been imprisoned. Most of Dickens's other critiques in this particular novel concern the social safety net; industry and the treatment and safety of workers; the bureaucracy of the British Treasury (as figured in the fictional "Circumlocution Office" [Bk. 1, Ch. 10]); and the separation of people based on the lack of interaction between the classes.

The novel begins in Marseilles "thirty years ago" (i.e., c. 1826), with the notorious murderer Rigaud telling his cell mate how he killed his wife. Arthur Clennam is returning to London to see his mother after the death of his father, with whom he had lived for twenty years in China. On his deathbed, his father had given him a mysterious watch murmuring "Your mother," which Arthur naturally assumed was intended for Mrs. Clennam, whom he and everyone else believed to be his mother.

Inside the watch casing was an old silk paper with the initials DNF (Do Not Forget) worked into it in beads. It was a message, but when Arthur showed it to the harsh and implacable Mrs Clennam, a religious fanatic, she refused to tell him what it meant and the two become estranged.
In London, William Dorrit, imprisoned as a debtor, has been a resident of Marshalsea debtors' prison for so long that his three children – snobbish Fanny, idle Edward (known as Tip) and Amy (known as Little Dorrit) — have all grown up there, although they are free to pass in and out of the prison as they please. Amy, devoted to her father, has been supporting them both through her sewing.

Once in London, Arthur is reacquainted with his former fiancée Flora Finching, who is now overweight and simpering. His supposed mother, Mrs Clennam, though arthritic and wheelchair-bound, still runs the family business with the help of her servant Jeremiah Flintwinch and his downtrodden wife Affery. When Arthur learns that Mrs Clennam has employed Little Dorrit as a seamstress, showing her unusual kindness, he wonders whether the young girl might be connected with the mystery of the watch. Suspecting his mother was partially responsible for the misfortunes of the Dorrits, Arthur follows the girl to the Marshalsea. He vainly tries to inquire about William Dorrit's debt in the poorly run Circumlocution Office, assuming the role of benefactor towards Amy, her father, and her brother. While at the Circumlocution Office he meets the struggling inventor Daniel Doyce, whom he decides to help by going into business with him. The grateful Amy falls in love with Arthur, but Arthur fails to recognise Amy's interest. At last, aided by the indefatigable rent-collector Pancks, Arthur discovers that William Dorrit is the lost heir to a large fortune, finally enabling him to pay his way out of prison.

The newly freed Dorrit decides that they should tour Europe as a newly respectable family. They travel over the Alps and take up residence for a time in Venice, and finally in Rome, displaying an air of conceit over their new-found wealth (except for Amy). Eventually, after a spell of delirium, Dorrit dies in Rome as does his distraught brother Frederick, a kind-hearted musician who has always stood by him. Amy, left alone, returns to London to stay with newly married Fanny and her husband, the foppish Edmund Sparkler.

The Wreck of the Golden Mary