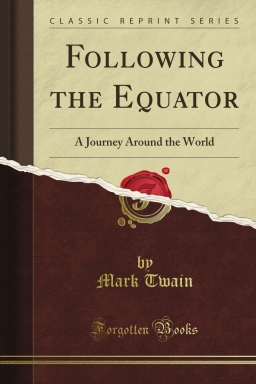 Twain was practically bankrupt in 1894 due to a failed investment into a "revolutionary" typesetting machine. In an attempt to extricate himself from debt of $100,000 (equivalent of about $2.5 million in 2010) he undertook a tour of the British Empire in 1895, a route chosen to provide numerous opportunities for lectures in English.

In Following the Equator, an account of that travel published in 1897, the author criticizes racism, imperialism and missionary zeal in observations woven into the narrative with classical Twain wit.

In keeping with that wit, and Twain's love of a tall tale, Twain included a number of fictional stories in the body of what is otherwise a non-fiction work. In particular, the story of how Cecil Rhodes made his fortune by finding a newspaper in the belly of a shark, and the story of how a man named Ed Jackson made good in life out of a fake letter of introduction to Cornelius Vanderbilt, were anthologized in Charles Neider (ed) The Complete Short Stories of Mark Twain, (Doubleday, 1957) where they are presented as fiction.