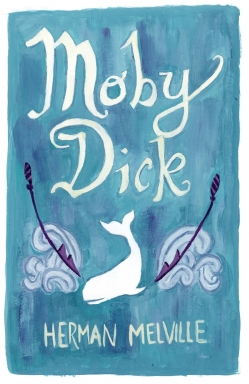 Moby-Dick; or, The Whale (1851) is a novel by Herman Melville, in which Ishmael narrates the monomaniacal quest of Ahab, captain of the whaler Pequod, for revenge on the albino sperm whale Moby Dick, which on a previous voyage destroyed Ahab's ship and severed his leg at the knee. A commercial failure and out of print at the time of the author's death in 1891, its reputation grew immensely during the twentieth century. D.H. Lawrence called it "one of the strangest and most wonderful books in the world," and "the greatest book of the sea ever written." Moby-Dick is considered a Great American Novel and an outstanding work of the Romantic period in America and the American Renaissance. "Call me Ishmael," is one of world literature's most famous opening sentences.

The product of a year and a half of writing, the book is dedicated to Nathaniel Hawthorne, "in token of my admiration for his genius," and draws on Melville's experience at sea, on his reading in whaling literature, and on literary inspirations such as Shakespeare and the Bible. The detailed and realistic descriptions of whale hunting and of extracting whale oil, as well as life aboard ship among a culturally diverse crew, are mixed with exploration of class and social status, good and evil, and the existence of God. In addition to narrative prose, Melville uses styles and literary devices ranging from songs, poetry and catalogs to Shakespearean stage directions,soliloquies, and asides.

The author changed the title at the very last moment in September 1851. The work first appeared as The Whale in London in October 1851, and then under its definitive title Moby-Dick in New York in November. The whale, however, appears in both the London and New York editions as "Moby Dick," with no hyphen. The British edition of five hundred copies was not reprinted during the author's life, the American of almost three thousand was reprinted three times at approximately 250 copies, the last reprinting in 1871. These figures are exaggerated because three hundred copies were destroyed in a fire at Harper's; only 3,200 copies were actually sold during the author's life.

Ishmael explains his need to go to sea and travels from Manhattan Island to New Bedford. The inn is crowded and he must share a bed with the tattooed Polynesian, Queequeg, a harpooneer whose father was king of the (imaginary) island of Rokovoko. The next morning Ishmael and Queequeg attend Father Mapple's sermon on Jonah, then head for Nantucket. Ishmael signs up with the Quaker ship-owners Bildad and Peleg for a voyage on their whaler Pequod. Peleg describes Captain Ahab to him: "He's a grand, ungodly, god-like man" who nevertheless "has his humanities" (Ch. 16, The Ship). They hire Queequeg the following morning. A man named Elijahprophesies a dire fate should Ishmael and Queequeg join Ahab. While provisions are loaded, shadowy figures board the ship. On a cold Christmas Day, the Pequod leaves the harbor.

Chapters discourse on the Cetology, or zoological classification and natural history of the whale, and describe the crew-members. The chief mate is 30-year old Starbuck, a Nantucket Quaker with a realist mentality, whose harpooneer is Queequeg; second mate is Stubb, from Cape Cod, happy-go-lucky and cheerful, whose harpooneer is Tashtego, a proud, pure-blooded Indian from Gay Head, Martha's Vineyard; the third mate is Flask, from Martha's Vineyard, short, stout, whose harpooner is Daggoo, a tall African, now a resident of Nantucket. 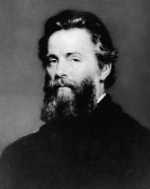 Some Rambling Notes of an Idle Excursion