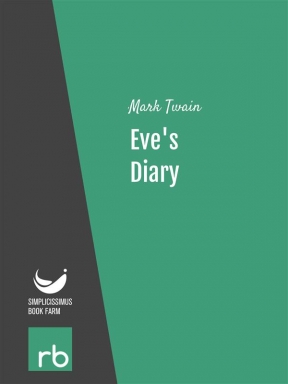 Eve's Diary is a comic short story by Mark Twain. It was first published in the 1905 Christmas issue of the magazine Harper's Bazaar, and in book format in June 1906 by Harper and Brothers publishing house. It is written in the style of a diary kept by the first woman in the biblical creation story, Eve, and is claimed to be "translated from the original MS." The "plot" of this novel is the first-person account of Eve from her creation up to her burial by, her mate, Adam, including meeting and getting to know Adam, and exploring the world around her, Eden. The story then jumps 40 years into the future after the Fall and expulsion from Eden. It is one of a series of books Twain wrote concerning the story of Adam and Eve, including 'Extracts from Adam's Diary,' 'That Day In Eden,' 'Eve Speaks,' 'Adam's Soliloquy,' and the 'Autobiography of Eve.' Eve's Diary has a lighter tone than the others in the series, as Eve has a strong appreciation for beauty and love. The book may have been written as a posthumous love-letter to Mark Twain's wife Olivia Langdon Clemens, or Livy, who died in June 1904, just before the story was written. Mark Twain is quoted as saying, "Eve's Diary is finished-I've been waiting for her to speak, but she doesn't say anything more." The story ends with Adam's speaking at Eve's grave, "Wherever she was, there was Eden."