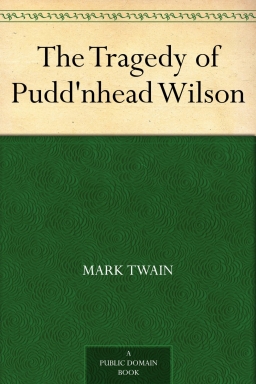 Pudd'nhead Wilson is a novel by Mark Twain. It was serialized in The Century Magazine (1893–4), before being published as a novel in 1894.

The setting is the fictional Missouri frontier town of Dawson's Landing on the banks of the Mississippi River in the first half of the 19th century. David Wilson, a young lawyer, moves to town and a clever remark of his is misunderstood, which causes locals to brand him a "pudd'nhead" – a nitwit. His hobby of collecting fingerprints does not raise his standing in the townsfolk's eyes, who see him as an eccentric and do not frequent his law practice.

Puddn'head Wilson moves into the background as the focus shifts to the slave Roxy, her son, and the family they serve. Roxy is only one-sixteenth black, and her son Valet de Chambre (referred to as "Chambers") is only 1/32 black. Roxy is principally charged with caring for her inattentive master's infant son Tom Driscoll, who is the same age as her own son. After fellow slaves are caught stealing and are nearly sold "down the river", to a master further south, Roxy fears for her life and the life of her son. First she decides to kill herself and Chambers to avoid being sold down the river, but then decides instead to switch Chambers and Tom in their cribs so that her son will live a life of privilege.

The narrative moves forward two decades, and Tom Driscoll (formerly Valet de Chambre), believing himself to be wholly white and raised as a spoiled aristocrat, has grown to be a selfish and dissolute young man. Tom's father has died and granted Roxy her freedom. Roxy worked for a time on river boats, and saved money for her retirement. When she finally is able to retire, she discovers that her bank has failed and all of her savings are gone. She returns to Dawson's Landing to ask for money from Tom.

The Jewel of Seven Stars