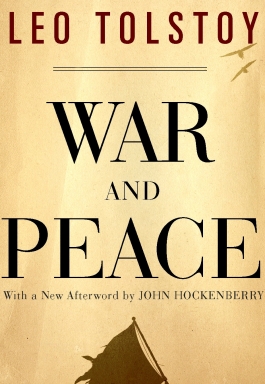 War and Peace (Pre-reform Russian: Война и миръ, Voyna i mir) is a novel by the Russian author Leo Tolstoy, first published in 1869. The work is epic in scale and is regarded as one of the most important works of world literature. It is considered as Tolstoy's finest literary achievement, along with his other major prose work, Anna Karenina (1873–1877).

War and Peace delineates in graphic detail events surrounding the French invasion of Russia, and the impact of the Napoleonic eraon Tsarist society, as seen through the eyes of five Russian aristocratic families. Portions of an earlier version of the novel, then known as The Year 1805, were serialized in the magazine The Russian Messenger between 1865 and 1867. The novel was first published in its entirety in 1869. Newsweek in 2009 ranked it first in its list of the Top 100 Books. In 2003, the novel was listed at number 20 on the BBC's survey The Big Read.

Tolstoy himself, somewhat enigmatically, said of War and Peace that it was "not a novel, even less is it a poem, and still less a historical chronicle". Large sections of the work, especially in the later chapters, are philosophical discussion rather than narrative.He went on to elaborate that the best Russian literature does not conform to standard norms and hence hesitated to call War and Peace a novel. (Instead, Tolstoy regarded Anna Karenina as his first true novel.)

The Kreutzer Sonata and Other Stories