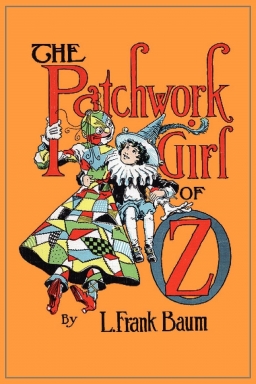 The Patchwork Girl of Oz

The Patchwork Girl of Oz by L. Frank Baum, is a children's novel, the seventh set in the Land of Oz. Characters include the Woozy, Ojo "the Unlucky", Unc Nunkie, Dr. Pipt, Scraps (the patchwork girl), and others. The book was first published on July 1, 1913, with illustrations by John R. Neill. In 1914, Baum adapted the book to film through his "Oz Film Manufacturing Company."

In the previous Oz book, The Emerald City of Oz, magic was used to isolate Oz from all outside worlds. Baum did this to end the Oz series, but was forced to restart the series with this book due to financial hardships. In the prologue, he explains how he managed to get another story about Oz, even though it is isolated from all other worlds. He explains that a child suggested he make contact with Oz with wireless telegraphy. Glinda, using her book that records everything that happens, is able to know that someone is using a telegraph to contact Oz, so she erects a telegraph tower and has the Shaggy Man, who knows how to make a telegraph reply, tell the story contained in this book to Baum.

The book was dedicated to Sumner Hamilton Britton, the young son of one of its publishers, Sumner Charles Britton of Reilly & Britton.

Ojo the Unlucky is a Munchkin boy who, devoted to life with his uncle Unc Nunkie in the wilderness but on the verge of starvation, goes to see a neighboring "magician" and old friend of Unc’s, Dr. Pipt. While there they see a demonstration of the Pipt-madePowder of Life, which animates any object it touches. Unc Nunkie and Dr. Pipt's wife are also the sufferers of the consequences of another of the Doctor's inventions, the Liquid of Petrifaction, which turns them into solid marble statues.

The remainder of this book is Ojo's quest through Oz to collect the five components of an antidote to the Liquid: a six-leaved clover found only in the Emerald City, three hairs from the tip of a Woozy's tail, a gill (a quarter of a pint) of water from a dark well (one that remains untouched by natural light), a drop of oil from a live man's body, and the left wing of a yellow butterfly. With the help of the patchwork girl Scraps, Bungle the Glass Cat (another of Dr. Pipt's creations), the Woozy, Dorothy, the Shaggy Man, and the Scarecrow, Ojo gathers all of these supplies but the left wing – the Tin Woodman, who rules the yellow Winkie Country, which is the only place where yellow butterflies grow, will not allow any living thing to be killed, even to save another's life.

Legends That Every Child Should Know; a Selection of the Great Legends of All Times for Young People

Prince Ricardo of Pantouflia; being the adventures of Prince Prigio's son

The Patchwork Girl of Oz