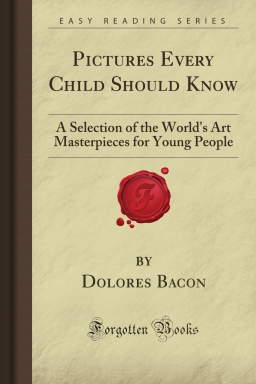 Man's inclination to decorate his belongings has always been one of the earliest signs of civilisation. Art had its beginning in the lines indented in clay, perhaps, or hollowed in the wood of family utensils; after that came crude colouring and drawing.

Among the first serious efforts to draw were the Egyptian square and pointed things, animals and men. The most that artists of that day succeeded in doing was to preserve the fashions of the time. Their drawings tell us that men wore their beards in bags. They show us, also, many peculiar head-dresses and strange agricultural implements. Artists of that day put down what they saw, and they saw with an untrained eye and made the record with an untrained hand; but they did not put in false details for the sake of glorifying the subject. One can distinguish a man from a mountain in their work, but the arms and legs embroidered upon Mathilde's tapestry, or the figures representing family history on an Oriental rug, are quite as correct in drawing and as little of a puzzle. As men became more intelligent, hence spiritualised, they began to express themselves in ideal ways; to glorify the commonplace; and thus they passed from Egyptian geometry to gracious lines and beautiful colouring.

Indian pottery was the first development of art in America and it led to the working of metals, followed by drawing and portraiture. Among the Americans, as soon as that term ceased to mean Indians, art took a most distracting turn. Europe was old in pictures, great and beautiful, when America was worshipping at the shrine of the chromo; but the chromo served a good turn, bad as it was. It was a link between the black and white of the admirable wood-cut and the true colour picture.

Some of the Colonists brought over here the portraits of their ancestors, but those paintings could not be considered "American" art, nor were those early settlers Americans; but the generation that followed gave to the world Benjamin West. He left his Mother Country for England, where he found a knighthood and honours of every kind awaiting him.

The earliest artists of America had to go away to do their work, because there was no place here for any men but those engaged in clearing land, planting corn, and fighting Indians. Sir Benjamin West was President of the Royal Academy while America was still revelling in chromos. The artists who remained chose such objects as Davy Crockett in the trackless forest, or made pictures of the Continental Congress.

After the chromo in America came the picture known as the "buckeye," painted by relays of artists. Great canvases were stretched and blocked off into lengths. The scene was drawn in by one man, who was followed by "artists," each in turn painting sky, water, foliage, figures, according to his specialty. Thus whole yards of canvas could be painted in a day, with more artists to the square inch than are now employed to paint advertisements on a barn.

The Centennial Exhibition of 1876 came as a glorious flashlight. For the first time real art was seen by a large part of our nation. Every farmer took home with him a new idea of the possibilities of drawing and colour. The change that instantly followed could have occurred in no other country than the United States, because no other people would have travelled from the four points of the compass to see such an exhibition. Thus it was the American's penchant for travel which first opened to him the art world, for he was conscious even then of the educational advantages to be found somewhere, although there seemed to be few of them in the United States.

After the Centennial arose a taste for the painting of "plaques," upon which were the heads of ladies with strange-coloured hair; of leather-covered flatirons bearing flowers of unnatural colour, or of shovels decorated with "snow scenes." The whole nation began to revel in "art." It was a low variety, yet it started toward a goal which left the chromo at the rear end of the course, and it was a better effort than the mottoes worked in worsted, which had till then been the chief decoration in most homes. If the "buckeye" was hand-painting, this was "single-hand" painting, and it did not take a generation to bring the change about, only a season. After the Philadelphia exhibition the daughter of the household "painted a little" just as she played the piano "a little." To-day, much less than a man's lifetime since then, there is in America a universal love for refined art and a fair technical appreciation of pictures, while already the nation has worthily contributed to the world of artists. Sir Benjamin West, Sully, and Sargent are ours: Inness, Inman, and Trumbull.

The curator of the Metropolitan Museum in New York has declared that portrait-painting must be the means which shall save the modern artists from their sins. To quote him: "An artist may paint a bright green cow, if he is so minded: the cow has no redress, the cow must suffer and be silent; but human beings who sit for portraits seem to lean toward portraits in which they can recognise their own features when they have commissioned an artist to paint them. A man will insist upon even the most brilliant artist painting him in trousers, for instance, instead of in petticoats, however the artist-whim may direct otherwise; and a woman is likely to insist that the artist who paints her portrait shall maintain some recognised shade of brown or blue or gray when he paints her eye, instead of indulging in a burnt orange or maybe pink! These personal preferences certainly put a limit to an artist's genius and keep him from writing himself down a madman. Thus, in portrait-painting, with the exactions of truth upon it, lies the hope of art-lovers!"

It is the same authority who calls attention to the danger that lies in extremes; either in finding no value in art outside the "old masters," or in admiring pictures so impressionistic that the objects in them need to be labelled before they can be recognised.

The true art-lover has a catholic taste, is interested in all forms of art; but he finds beauty where it truly exists and does not allow the nightmare of imagination to mislead him. That which is not beautiful from one point of view or another is not art, but decadence. That which is technical to the exclusion of other elements remains technique pure and simple, workmanship-the bare bones of art. A thing is not art simply because it is fantastic. It may be interesting as showing to what degree some imaginations can become diseased, but it is not pleasing nor is it art. There are fully a thousand pictures that every child should know, since he can hardly know too much of a good thing; but there is room in this volume only to acquaint him with forty-eight and possibly inspire him with the wish to look up the neglected nine hundred and fifty-two.