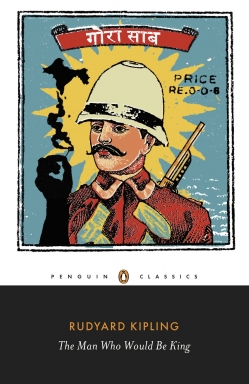 The Lady of the Lake

A Legend of Montrose

Notes From The Underground

The Possessed (The Devils)

The Man Who Would Be King (1888) is a novella by Rudyard Kipling. It is about two British adventurers in British India who become kings of Kafiristan, a remote part of Afghanistan. The story was inspired by the exploits of James Brooke, an Englishman who became the first White Rajah of Sarawak in Borneo; and by the travels of American adventurer Josiah Harlan, who was granted the title Prince of Ghor in perpetuity for himself and his descendants. It incorporates a number of other factual elements such as locating the story in eastern Afghanistan's Kafiristan and the European-like appearance of many of Kafiristan's Nuristani people, and an ending modelled on the return of the head of the explorer Adolf Schlagintweit to colonial administrators.

The story was first published in The Phantom Rickshaw and other Eerie Tales (Volume Five of the Indian Railway Library, published by A. H. Wheeler & Co of Allahabad in 1888). It also appeared in Wee Willie Winkie and Other Child Stories in 1895, and in numerous later editions of that collection.

A radio adaption was broadcast on the show Escape on 7 July 1947 and again on 1 August 1948. In 1975, it was adapted by director John Huston into a feature film of the same name, starring Sean Connery and Michael Caine as the adventurers and Christopher Plummer as Kipling.

As early as 1954, Humphrey Bogart expressed the desire to star in "The Man Who Would Be King" and was in talks with director John Huston.

The narrator of the story is a British journalist in India—Kipling himself, in all but name. While on a tour of some Indian native states he meets two scruffy adventurers, Daniel Dravot and Peachey Carnehan. He rather likes them, but then stops them from blackmailing a minor rajah. A few months later they appear at his office in Lahore. They tell him their plan. They have been "Soldier, sailor, compositor [typesetter], photographer... [railroad] engine-drivers, petty contractors," and more, and have decided India is not big enough for them. The next day they will go off to Kafiristan to set themselves up as kings. Dravot can pass as a native, and they have twenty Martini-Henry rifles (then perhaps the best in the world). They plan to find a king or chief, help him defeat his enemies, then take over for themselves. They ask the narrator for the use of any books or maps of the area–as a favour, because they are fellow Freemasons, and because he spoiled their blackmail scheme.

Two years later, on a scorching hot summer night, Carnehan creeps into the narrator's office. He is a broken man, a crippled beggar clad in rags and he tells an amazing story. Dravot and Carnehan succeeded in becoming kings: finding the Kafirs, who turn out to be white ("so hairy and white and fair it was just shaking hands with old friends"), mustering an army, taking over villages, and dreaming of building a unified nation. The Kafirs (pagans, not Muslims) were impressed by the rifles and Dravot's lack of fear of their idols, and acclaimed him as a god, the reincarnation or descendant of Alexander the Great. The Kafirs practised a form of Masonic ritual, and Dravot's reputation was further cemented when he showed knowledge of Masonic secrets that only the oldest priest remembered.

The Law and the Lady