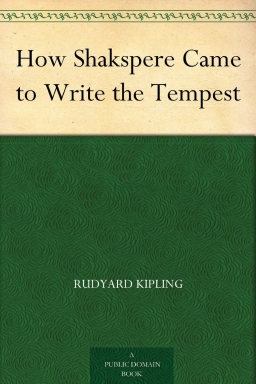 The Eyes of Asia

Letters on Demonology and Witchcraft

On the Prospects of Christianity

Shakespeare and the Modern Stage

Treatise on Parents and Children

Steam, Its Generation and Use

MR. KIPLING’S brilliant reconstruction of the genesis of the ‘Tempest’ may remind us how often that play has excited the creative fancy of its readers. It has given rise to many imitations, adaptations, and sequels. Fletcher copied its storm, its desert island, and its woman who had never seen a man. Suckling borrowed its spirits. Davenant and Dryden added a man who had never seen a woman, a husband for Sycorax, and a sister for Caliban. Mr. Percy Mackaye has used its scene, mythology, and persons for his tercentenary Shaksperian Masque. Its suggestiveness has extended beyond the drama, and aroused moral allegories and disquisitions. Caliban has been elaborated as the Missing Link, and in the philosophical drama of Renan as the spirit of Democracy, and in Browning’s poem as a satire on the anthropomorphic conception of Deity.

But apart from such commentaries by poets and philosophers, the poem has lived thesemany generations in the imaginations of thousands. There, the enchanted island has multiplied and continued its existence. Shelley sang,

Of a land far from ours
Where music and moonlight and feeling are one.

Shakspere created that land as the possession of each of us. Not far removed, but close to the great continent of our daily routine and drudgery, lies this enchanted island where we may find music and moonlight and feeling, and also fun and mischief and wisdom. There, in tune with the melody and transfigured as by the charm of moonlight, we may encounter the nonsense of drunken clowns, the mingled greed and romance of primitive man, the elfishness of a child, the beauty of girlhood, and the benign philosophy of old age. We may leave the city at the close of business, and, if we avoid the snares of Caliban and Trinculo, we may sup with Prospero, Ariel, and Miranda.

How did Shakspere discover this enchanted island? From what materials did he create the “baseless fabric of this vision”? What had London playhouses to do with these spirits of thin air? On what books or plays were these dreams made? Out of the issues of rivalry and profit which beset the King’s company of players at the Globe and the Blackfriars, how came this “insubstantial pageant”? We have been told that the Sonnets are the key with which to unlock Shakspere’s heart; and perhaps if we could answer all these questions we might have the key to his imagination. I do not believe, however, that his imagination was lockt up. Rather it was open wide to many impulses, hospitable to countless influences. This apparently is the opinion of Mr. Kipling, who suggests that Shakspere’s “vision was woven from the most prosaic material, from nothing more promising, in fact, than the chatter of a half-tipsy sailor at the theater.”

What Is Man? and Other Essays

The Impossibilities of Anarchism

How to Tell a Story, and Other Essays

Saigon city beat - on Its Culture, Viewpoints and Gourmet

The Eyes of Asia

On the Prospects of Christianity