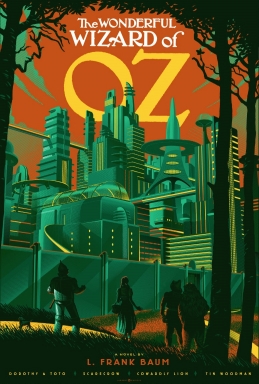 The Wonderful Wizard of Oz is a children's novel written by L. Frank Baum and illustrated by W. W. Denslow. Originally published by the George M. Hill Company in Chicago on May 17, 1900, it has since been reprinted numerous times, most often under the name The Wizard of Oz, which is the name of both the popular 1902 Broadway musical and the well-known 1939 film adaptation.

The story chronicles the adventures of a young girl named Dorothy Gale in the Land of Oz, after being swept away from her Kansasfarm home in a cyclone. The novel is one of the best-known stories in American popular culture and has been widely translated. Its initial success, and the success of the 1902 Broadway musical which Baum adapted from his original story, led to Baum's writing thirteen additional Oz books. The original book has been in the public domain in the US since 1956.

Dorothy is a young orphaned girl raised by her Uncle Henry and Aunt Em in the bleak landscape of a Kansas farm. She has a little black dog Toto, who is her sole source of happiness on the dry, gray prairies. One day, Dorothy and Toto are caught up in a cyclone inside their farmhouse which was deposited in a field in Munchkin Country, the eastern quadrant of the Land of Oz. The falling house kills the evil ruler of the Munchkins, the Wicked Witch of the East, for which the Munchkins are extremely grateful.

On her way down the road of yellow bricks, Dorothy frees the Scarecrow from the pole on which he is hanging, applies oil from a can to the rusted connections of the Tin Woodman, and encourages the two of them, including the Cowardly Lion, to journey with her and Toto to the Emerald City. The Scarecrow wants to get a brain, the Tin Woodman wants a heart, and the Cowardly Lion wants courage. All four of the travelers believe that the Wizard can solve their troubles. The party finds many adventures on their journey, including overcoming obstacles such as gaps in the yellow brick road, vicious kalidahs (beasts with bodies like bears and heads like tigers), a river, and a field of deadly poppies.