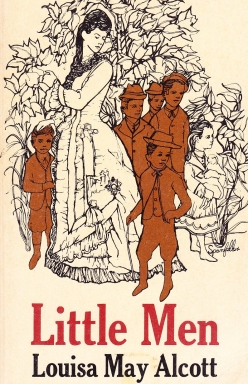 Little Men, or Life at Plumfield with Jo's Boys, is a novel by American author Louisa May Alcott, first published in 1871. The novel reprises characters from Little Women and is considered by some the second book in an unofficial Little Women trilogy, which is completed with Alcott's 1886 novel Jo's Boys, and How They Turned Out: A Sequel to "Little Men". It tells the story of Jo Bhaer and the children at Plumfield Estate School. It was inspired by the death of Alcott's brother-in-law, which reveals itself in one of the last chapters, when a beloved character from Little Women passes away. It has been adapted to a 1934 film, a 1940 film, a 1998 film, atelevision series, and a Japanese animated television series.

The book recounts six months in the life of the students at Plumfield, a school run by Professor Friedrich and Mrs. Josephine Bhaer. The idea of the school is first suggested at the very end of part two of "Little Women", when Jo inherited the estate from her Aunt March.

The story begins with the arrival of Nat Blake, a shy young orphan who used to earn a living playing the violin. We are introduced to the majority of the characters through his eyes. There are ten boys at the school already; Nat, and later his friend Dan, join them, and soon after Nan arrives as companion for Daisy, the only girl. Jo's sons Rob and Teddy are younger than the others and are not counted among the pupils, nor are the two girls, Daisy and Nan.

The school is not run on conventional lines. All the children have their own gardens and their own pets, and are encouraged to experiment with running businesses. Pillow fights are permitted on Saturdays, subject to a time limit. Children are treated as individuals, with a strong emphasis on gently molding their characters.

Daisy Brooke, Meg's daughter, is at the school with her twin brother Demi, but is somewhat isolated with no other girls her age, until Nan's arrival. Nan is even more of a tomboy than Jo was as a child, while Daisy is interested mainly in dolls and in her own mini kitchen, purchased by Jo's brother-in-law, Laurie.

The other new student, Dan, is introduced by Nat. Dan originally decides the other boys are "molly-coddles" and leads them in experiments with fighting, drinking, smoking,swearing and playing cards, which results in his being temporarily removed from the school. He returns eventually with an injured foot, and redeems himself by standing up for Nat when Nat is falsely accused of theft by the other boys. He also becomes curator of the school's natural history museum.

Personal relationships are central to the school, and diversity is celebrated. Daisy is deeply attached to her twin brother, to shy Nat, and to tomboy Nan. Nan and Tommy are also close and intend to marry when they grow up. Dan, already friends with Nat, is unexpectedly drawn to the pious Demi and the toddler Teddy. While Franz, Emil, Daisy and Demi are all related to the Bhaers, they are not treated with favouritism and are encouraged to overcome their faults just the same as the other pupils.

Anne Of The Island