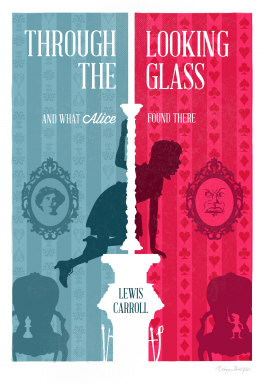 Through the Looking-Glass, and What Alice Found There (1871) is a novel by Lewis Carroll (Charles Lutwidge Dodgson), the sequel to Alice's Adventures in Wonderland (1865). It is based on his meeting with another Alice, Alice Raikes. Set some six months later than the earlier book, Alice again enters a fantastical world, this time by climbing through a mirror into the world that she can see beyond it. Though not quite as popular as Wonderland, Through the Looking-Glass includes such celebrated verses as "Jabberwocky" and "The Walrus and the Carpenter", and the episode involving Tweedledum and Tweedledee.

Alice is playing with a white kitten (whom she calls "Snowdrop") and a black kitten (whom she calls "Kitty")—the offspring of Dinah, Alice's cat in Alice's Adventures in Wonderland-when she ponders what the world is like on the other side of a mirror's reflection. Climbing up on the fireplace mantel, she pokes at the wall-hung mirror behind the fireplace and discovers, to her surprise, that she is able to step through it to an alternative world. In this reflected version of her own house, she finds a book with looking-glass poetry, "Jabberwocky", whosereversed printing she can read only by holding it up to the mirror. She also observes that the chess pieces have come to life, though they remain small enough for her to pick up.

Upon leaving the house (where it had been a cold, snowy night), she enters a sunny spring garden where the flowers have the power of human speech; they perceive Alice as being a "flower that can move about." Elsewhere in the garden, Alice meets the Red Queen, who is now human-sized, and who impresses Alice with her ability to run at breathtaking speeds. This is a reference to the chess rule thatqueens are able to move any number of vacant squares at once, in any direction, which makes them the most "agile" of pieces.

The Red Queen reveals to Alice that the entire countryside is laid out in squares, like a gigantic chessboard, and offers to make Alice a queen if she can move all the way to the eighth rank/row in a chess match. This is a reference to the chess rule of Promotion. Alice is placed in the second rank as one of the White Queen's pawns, and begins her journey across the chessboard by boarding a train that literally jumps over the third row and directly into the fourth rank, thus acting on the rule that pawns can advance two spaces on their first move.

The Game of Logic