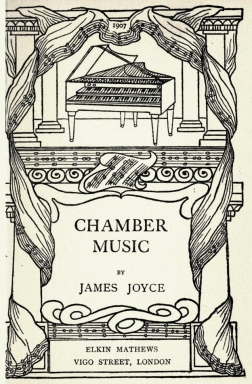 The Rape of Lucrece

Chamber Music is a collection of poems by James Joyce, published by Elkin Matthews in May, 1907. The collection originally comprised thirty-four love poems, but two further poems were added before publication ("All day I hear the noise of waters" and "I hear an army charging upon the land").

Although it is widely reported that the title refers to the sound of urine tinkling in a chamber pot, this is a later Joycean embellishment, lending an earthiness to a title first suggested by his brother Stanislaus and which Joyce (by the time of publication) had come to dislike: "The reason I dislike Chamber Music as a title is that it is too complacent", he admitted to Arthur Symons in 1906. "I should prefer a title which repudiated the book without altogether disparaging it."

Richard Ellmann reports (from a 1949 conversation with Eva Joyce) that the chamberpot connotation has its origin in a visit he made, accompanied by Oliver Gogarty, to a young widow named Jenny in May 1904. The three of them drank porter while Joyce read manuscript versions of the poems aloud - and, at one point, Jenny retreated behind a screen to make use of a chamber pot. Gogarty commented, "There's a critic for you!". When Joyce later told this story to Stanislaus, his brother agreed that it was a "favourable omen".

In Ulysses, Leopold Bloom reflects, "Chamber music. Could make a pun on that."

In fact, the poetry of Chamber Music is not in the least bawdy, nor reminiscent of the sound of tinkling urine. Although the poems did not sell well (fewer than half of the original print run of 500 had been sold in the first year), they received some critical acclaim. Ezra Poundadmired the "delicate temperament" of these early poems, while Yeats described "I hear an army charging upon the land" as "a technical and emotional masterpiece". In 1909, Joyce wrote to his wife, "When I wrote [Chamber Music], I was a lonely boy, walking about by myself at night and thinking that one day a girl would love me."